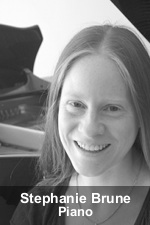 Stephanie Brune has taught piano for well over a decade. She earned a B.M. in Piano Performance at Illinois Wesleyan University where she studied with Dr. Lawrence Campbell. She won both the university’s Concerto-Aria competition and Honor Recital award her senior year. Her M.A. is in Liturgical Theology, from The Liturgical Institute at University of Saint Mary of the Lake. Mrs. Brune is the director of music at St. Peter Catholic Church, Volo, where she conducts four polyphonic choirs and two Gregorian chant scholas. Mrs. Brune believes that proficiency with any instrument is dependent more upon hard work than perceived natural ability. She is dedicated to giving each of her students a well-rounded musical education, complete with technique, theory, the ability to sight-read and transpose, and a stylistically diverse body of repertoire. When not teaching piano, playing organ, or directing choirs, Mrs. Brune loves to read, garden, and spend time with family.