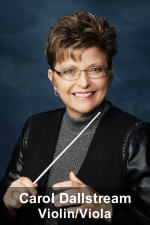 Ms. Dallstream started her musical career in 4th grade as a French Horn student. She earned a full scholarship in music to Northern Illinois University where she earned a Bachelor of Music Education degree in 1977. After raising two daughters, she started her educational career in 1989 in the Lake Zurich school district. Her Lake Zurich Strolling Strings played at the National Strolling String convention in Kansas City and in Washington DC for the 50th Anniversary of DDay. She moved to the Palatine school district in 1992, where she started the Palatine Chamber Strings, earning Division I Ratings at IGSMA District and State contest and Superior ratings and Grand Champion status at the Music in the Parks Festival for 8 years. In 1997 she earned a Masters in Curriculum and Instruction at Concordia University in River Forest, and in 2000 a Masters in Educational Leadership from Northern Illinois University. In 2002, she moved to the St. Charles school district and achieved National Board Certified status. In 2003, she inaugurated the Thompson Middle School Pro Arte Ensemble. This auditioned group of 6th, 7th and 8th graders earned Division I Ratings and the IGSMA District and State music contests, earned Honors status twice and captured the Grand Champion designation with Superior ratings at the Music in the Parks Festival for 15 years. In January, 2017, The Pro Arte  Ensemble performed at the Illinois Music Educator Association’s Annual State Convention. Ms. Dallstream has served on a National Board for Professional Teaching Standards Mentor Cohort leadership team, re-certified as a National Board Certified Teacher in 2010 and served as a portfolio assessor twice. Ms. Dallstream has served as a clinician for other school districts and as an adjudicator for solo and ensemble and organizational contests. She was named the Elgin Symphony Orchestra Teacher of the Year in 2017. Ms. Dallstream continues making music with the Harper Symphony, the Palatine Community Band, The Orchard Symphony, and the Judson Symphony on violin, cello and bass and French Horn. Ms. Dallstream has two daughters, 7 grandchildren and has been married for 20 years. In her spare time she enjoys golf, bible study, running triathlons and serving her community.